id G. Subu grew up in Troy, MI, a suburb of Detroit. He received a Bachelor of Arts (1993) and a Master of Arts (1997) in Comparative Religion from Western Michigan University, Kalamazoo, Michigan. His graduate research and thesis focused on the Dormition of the Mother of God Orthodox Monastery in Rives Junction, MI, which opened his heart and compelled him to follow his calling in seminary. He completed his theological studies at St. Tikhon’s Seminary, South Canaan, PA, and received a Master of Divinity degree (2000). During his seminary years he served a two-year internship with the Office of Youth and Young Adult Ministry in the Orthodox Church of America. In 2018 he completed a Doctor of Ministry (D.Min.) from St. Vladimir Orthodox Theological Seminary in Crestwod, NY with the Project "Repent and Recover: Addiction Recovery and Traditional Christian Ascetic principles for pastors and Their Parishioners."

In 2000 he was ordained a priest by Archbishop Nathaniel (Popp) of the Romanian Orthodox Episcopate of America at his family’s home parish of Ss. Peter and Paul in Dearborn Hts., MI. He was then assigned to the parish of Holy Cross in Hermitage, PA where he served joyfully until the end of 2005. In 2006, a new chapter of his family’s life began as they moved to Northern Virginia for Father’s new assignment at The Protection of the Holy Mother of God Parish (a.ka. St. Mary) in Falls Church.

Fr. David continues to be involved in ministry to young people on a diocesan and national level. He has co-authored the on-line OCF Starter Kit with Rev. Fr. Michael Anderson, as well as a number of articles in The Orthodox Church news magazine, youth ministry programs for The Hub, and two articles with Fr. Benjamin Tucci in the OCA Resource Handbook, and articles in The Orthodox Church and Solia. He also has participated in mission trips to Project Mexico and Hogar Raphael Ayau (Guatemala) and Romania with Orthodox Christian Fellowship’s Real Break and National AROY. He served on the Romanian Epicopate's Episcopate Council and as Director of Department of Religious Education, and continues to serve as an anchor teacher and assitant director at Camp Vatra. He is co-founder of Doxacon, the first ever Christian science-fiction/fantasy conference/convention.

In 1997, David Subu married the love of his life, Preoteasa Stephanie. She holds a Bachelor of Arts Degree in Art Teaching from Western Michigan University, minoring in Art History and Comparative Religion. They have been blessed with three children. Preoteasa has served in the education field in various capacities, including former assistant headmaster of Orthodox Christian Academies of Northeast Ohio (Warren, Ohio campus). She currently works as a Database administrator and IT support for a large local non-profit and supports the parish with her skills in this regard as well. 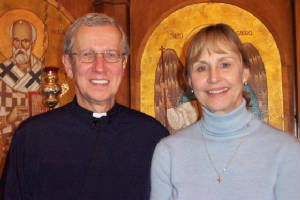 What is a deacon? According to Protodeacon Peter, "The word ‘deacon’ comes from the Greek ‘diakon’, which means ‘servant’. The deacon’s job is simply to re-present Christ as Servant in the Church, the one who comes not to be served but to serve (Matt 20:25-28). He assists the priest in the liturgical services, leads the people in prayer, and performs whatever jobs are necessary in the Church (Acts 6:2-6). He has no authority on his own; his vocation is to show forth Christ as Servant. For the deacon, to live is to serve and to serve is to live. This is a joyful task.”

Protodeacon Peter was ordained to the Holy Diaconate by Archbishop Dmitri of Dallas in 1975. He was encouraged to prepare for ordination by Protopresbyters Alexander Warnecke and Alexander Schmemann, both of blessed memory. Almost half of his 39 years of diaconal service was spent overseas in Japan, Singapore, Australia, Germany and Hong Kong, mostly with parishes and missions of the Ecumenical Patriarchate. He is presently a Trustee of St Vladimir’s Orthodox Theological Seminary, and serves as a member of the OCA Sexual Misconduct Policy Advisory Committee and the Secretariat of the Assembly of Canonical Orthodox Bishops of the United States of America. He has served on the OCA NY-NJ Diocesan Council, the OCA Metropolitan Council, and the Metropolitanate Council of Hong Kong and Southeast Asia, Ecumenical Patriarchate.

Protodeacon Peter was born and raised in Bayonne, NJ, of Russian Orthodox parents. He served as an altar boy at Ss Peter and Paul Church in Bayonne, and was active in Orthodox youth, camping, and fellowship activities in high school and university days. He was educated at The Cooper Union in New York City and Syracuse University where he received Bachelor's and Master's degrees in Electrical Engineering, respectively. Protodeacon Peter was employed by and is now retired from Exxon Mobil Corporation, with 33 years of operations, planning and general management experience. His community activities have included serving as the Chairman of the Governing Board, International School of Hamburg, Germany, and Member, Hong Kong Advisory Committee, US-China Business Council.


Studying Russian at the US Coast Guard Academy in New London, Connecticut (where he graduated in 1980), first awakened in Deacon Nicholas an interest in Orthodoxy.  He was assigned to a ship that conducted Alaskan fisheries patrols, and on a ship visit to Kodiak Island he learned the story of Saint Herman.  He then began to read seriously about Orthodoxy, took instruction at Holy Trinity Cathedral () in San Francisco, and was received into the Church on Holy Saturday, 1983, by Father Seraphim Gisetti.

Coast Guard service took Deacon Nicholas from San Francisco to the Boston area and then to Connecticut, and in every place he attended a local Orthodox parish, singing in the choir and often serving on the parish council.

Deacon Nicholas left the Coast Guard in 1990 and entered federal civilian service in the Washington, D.C. area. In 1994 he was tonsured a reader. That same year he was married to his wife, Cathy. They attended Holy Trinity parish in Reston, Virginia, and then came in 2003 to the Protection of the Holy Mother of God parish in Falls Church. Deacon Nicholas and Deaconessa Cathy have two sons, Nick and John, who regularly serve in the altar.

After completing the Diaconal Vocations Program of the OCA, Deacon Nicholas was ordained to the holy diaconate by His Eminence Archbishop NATHANIEL on February 15, 2015.

He retired from the federal government in 2016 and is now an assistant professor at Catholic University, where he teaches courses on intelligence and helps minister to the small Orthodox community there.

"Today the faithful celebrate the feast with joy / illumined by your coming, O Mother of God. / Beholding your pure image we fervently cry to you; / Encompass us beneath the precious veil of your protection; / Deliver us from every form of evil by entreating Christ, / your Son and our God that He may save our souls.”

Consecrated in 1988, Protection of the Holy Mother of God Orthodox Church (St. Mary), is a community of the Orthodox Church in America, an English-language parish of the Romanian Orthodox Episcopate of America, that meets in Falls Church, VA.  Our congregation is a mix of cradle, convert, and "re-vert" worshippers, coming from all different walks of life and backgrounds. In other words, we are a great American "melting pot" of Orthodoxy in the heart of the Nation's Capital!

To share the light and the joy of Christian Orthodoxy in Northern Virginia, to educate the faithful and newcomers in the Faith and its teachings and traditions, making them accessible to all, and to practice hospitality and community building in the name of our Lord Jesus Christ.

"Celebrating over 25 Years of Truth, Tradition and Hospitality in Northern Virginia"
We invite you to join Rev. Father David Subu, Protodeacon Peter Danilchick, Deacon Nicholas Dujmovic and our entire community to share the fullness of faith with our friends and neighbors. Please join us for worship and fellowship. If you know someone who may be seeking an English-Service focused Orthodox community, please tell him or her about us!